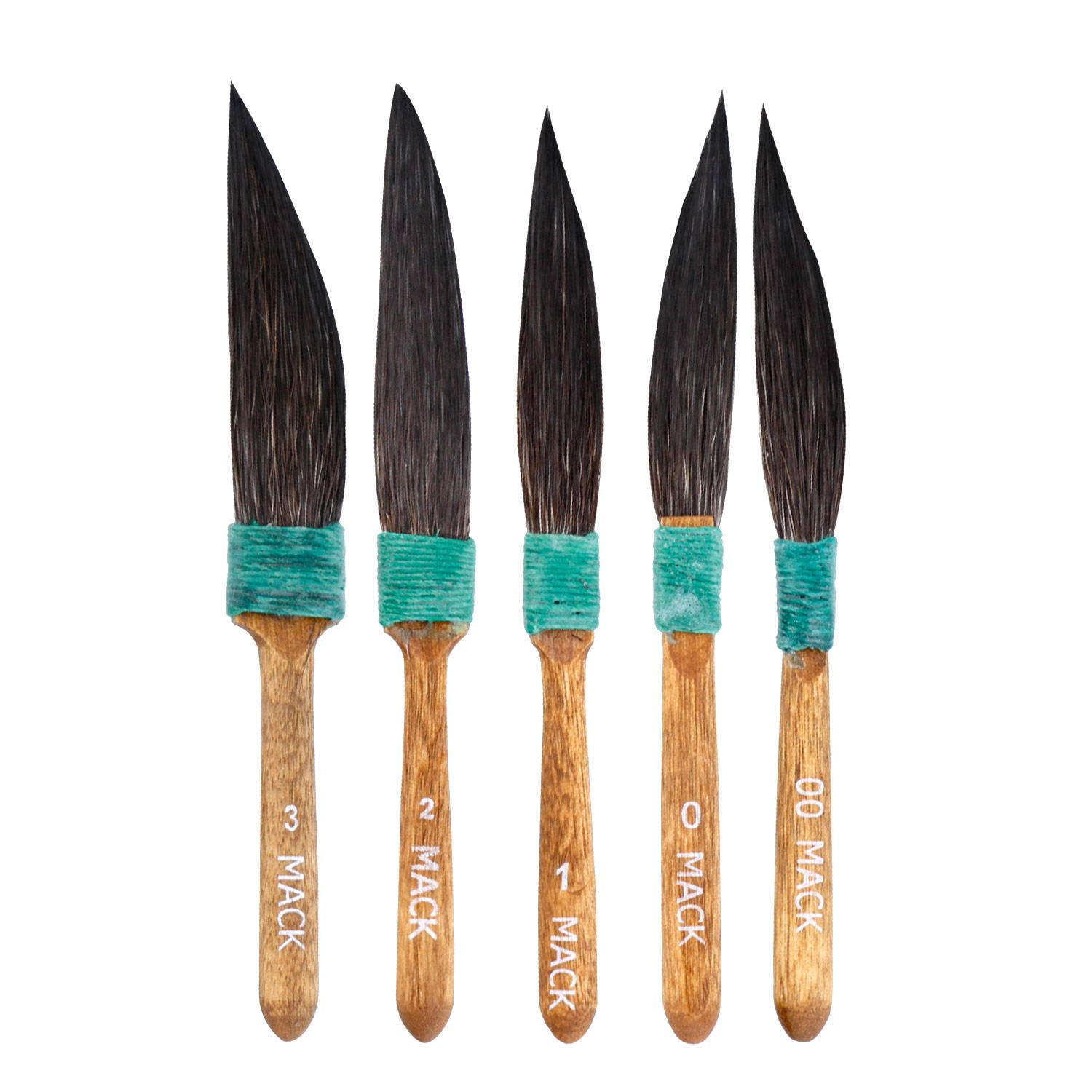 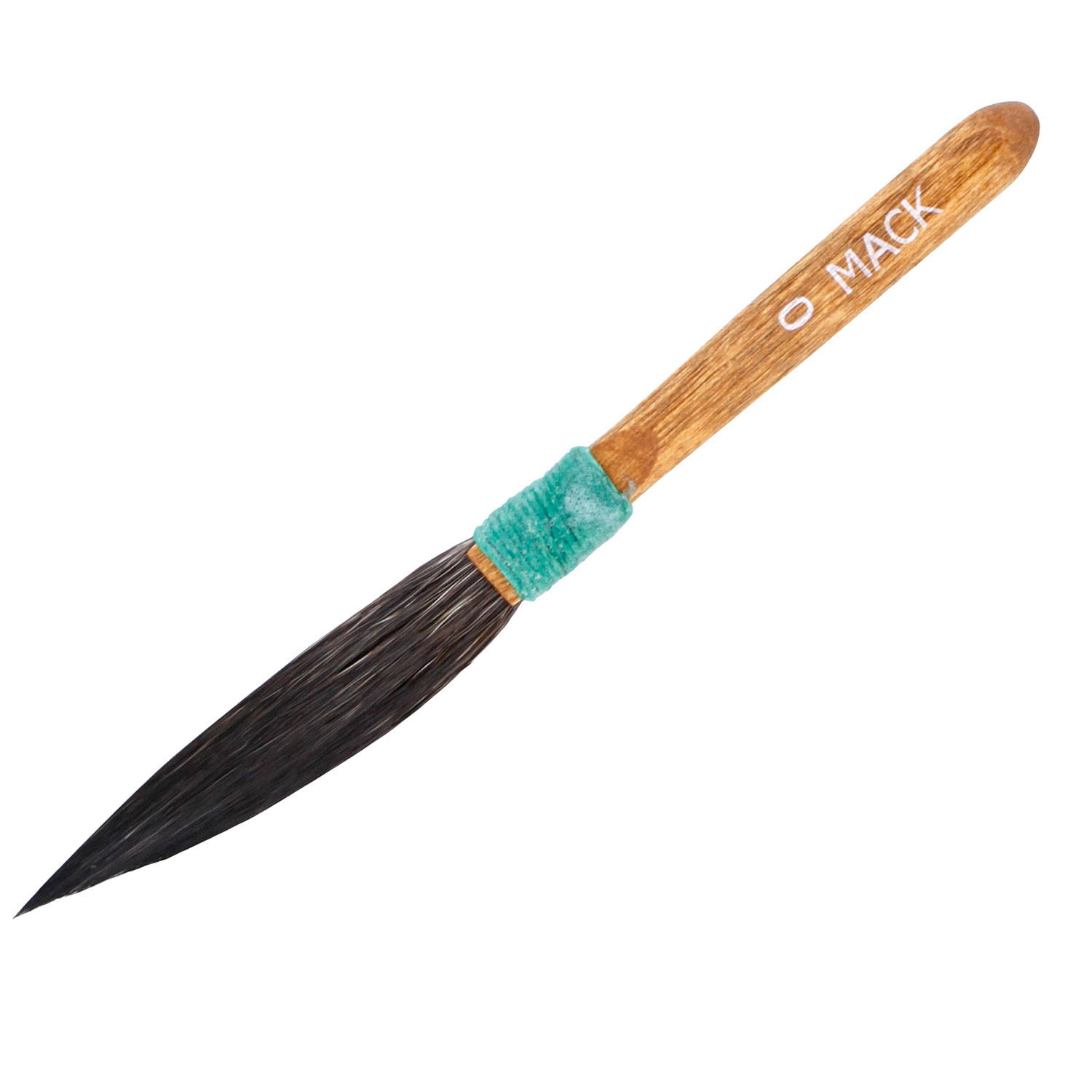 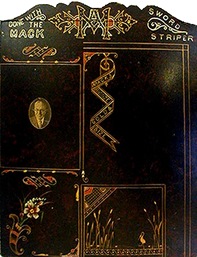 1st & Oldest Pinstripe Panel circa 1900
Although the Andrew Mack and Son Brush Company was founded in 1891,its history goes back to 1865. It was during that year that J.J. Deal founded his wagon and buggy factory in the small village of Jonesville,Michigan. The Deal factory quickly gained the reputation of building the finest carts, wagons, and carriages in the Midwest. The products were first class in every detail – even the paint!
It was with this emphasis on quality that the Mack Company made its contribution for several years prior to 1891. Andrew Mack (1860 – 1946)had been the head striper at the Deal Company Andrew was a true perfectionist and he had never been completely happy with the quality and performance of the striping brush furnished by the Deal Co.
Through months, and probably years, of experimentation with various brushes, Andrew finally developed what is now known as the ‘Mack Striping Pencil’. All carriages carried a great deal of pinstriping during this period of our country’s history. It wasn’t long before other companies and pinstripers throughout the United States heard about Andrew’s improved striping brush and wanted to secure a few brushes for their own striping needs.
Soon the demand for Mr. Mack’s brushes was so great that it was time to strike out on his own and enter into the manufacturing of striping brushes. Andrew Mack resigned from the Deal factory in 1891 and was destined to originate one of the most unique manufacturing companies in the world.
Since Andrew Mack died in 1946 (at the age of 86), the early history of his company is very sketchy at best. We know that he operated his company out of several buildings and homes prior to his death. We understand that in the 1930’s there were over 30 ladies working for him full time manufacturing just the pinstriping brush. Of course, one must remember that this was the heyday of pinstriping (no tape, rollers,spray or air brush guns were on the market at that time).

Andrew’s son, Glenwood, was involved in the family business on and off from 1911 until he took over full ownership in 1946 upon Andrew’s death.The years of experimentation for the Mack Company, were from 1946until 1961. Glenwood spent countless hours in quality control and time studies. He entered the photographic market with a brush that was used in cleaning camera lenses. He contracted artist and sign writer brushes from a company in New York called “Art & Sign”. He developed this art and sign writer business until it accounted for about 25% of the overall sales. However, by 1961, Glenwood was 72 years old and it was time to step down and enjoy life.

Jon M. (Mike) Fast, a friend of the family, purchased the business in1960. He was a junior at the University of Michigan Business School at the time, and has continued as the president of the business to the present date. Sales, through inflation and growth, have increased many times over the years, and the Andrew Mack and Son Co. is more viable and diversified now than ever before. The company continues as the world leader in quality pinstriping and touch up brushes, but they have also branched out into many other allied areas. One of the fastest growing areas and also the most gratifying has been developing new and unusual brushes for the sign painter.

The pinstriping brush that is manufactured today is essentially the same brush that Andrew Mack first made in 1891, (although many of the leading stripers in the world would give anything to get hold of one of those “old Mack brushes”). The pinstriping brush is totally a hand-crafted operation, just as it was in 1891. There is not one piece of machinery used in its manufacturing. It is completely manufactured in Jonesville, Michigan, by eight to ten very talented technicians. 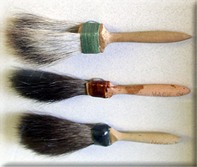 Original Swords
The squirrel hair comes from the cold regions of the Siberia and northern China. Many attempts have been made to raise squirrels or use the tails from northern Canada, but the quality just isn’t the same! On aside note, our brush, as well as many other artist and sign writer brushes, have always been labeled ‘Camel Hair.’ This couldn’t be further from the truth. There is no such thing as ‘Camel Hair’. It was a name given to squirrel and other animal hair a long time ago. Most of us have been afraid to drop the label for fear of losing you as a satisfied customer.
The hair that we use in our striping brushes is 100% unmixed squirrel hair and the brush is made in America by Americans. This is a statement that no other pinstriping manufacturer can claim.
The Andrew Mack Brush Company is rich in history and pride. We are the originators of the Pinstriping Brush, and we feel that we still give you the very best brush in the world.
I am sure Mr. Andrew Mack would be proud of his company today. I am certainly proud to be the present owner. My wife, Betty, and I have been the active owners of the company since 1960. We are extremely fortunate that our son, Chris, has chosen to “come home.” He joined the family business in the spring of 1997. To date, he really enjoys the business and it will be great to have The Brush Company remain in the Fast family. We have had great, dedicated employees through the years. It has been a challenge to develop new products and ideas these past forty years. We have all enjoyed a fantastic relationship with you.

Added to your cart:

Subtotal
Product has been added to your wishlist.
You can view your wishlist by creating or login account.
Please create account through ##customer_email## email
Login Register